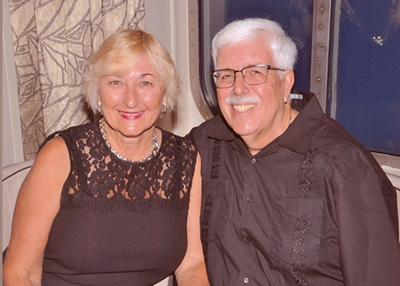 The UI College of Nursing will award a new scholarship to anesthesia graduate students this fall, thanks to alumni and the scholarship’s namesakes: Edward and Sheila Thompson.

When Jessica Henderson (BSN ʼ04, MSN ʼ09) is waking a patient after a major medical procedure, she still remembers the sage advice she learned from Dr. Edward Thompson, who was the University of Iowa’s Anesthesia Nursing Program Director from 1998 to 2009.

“One of the first things he told me was that if a patient doesn’t wake up to your normal voice, they’re not ready to wake up,” said Henderson, who is a Certified Registered Nurse Anesthetist (CRNA) in Bloomfield, Iowa. “Ed always had a calming voice, and if you’re calm, then your patient—and the entire operating room—is also calm. Ed was always so supportive and encouraging.”

This fall, a scholarship honoring Edward and his wife, Sheila Thompson, will be awarded for the first time to a graduate student within the UI’s College of Nursing Anesthesia Program. Henderson and classmate Dr. Randy Cornelius (MSN ʼ09, DNP ʼ15) started a campaign in 2009, as graduate students, to create the Dr. Edward S. and Sheila A. Thompson Graduate Scholarship.

“We were talking one day and realized that there wasn’t a scholarship for CRNA students,” said Cornelius. “Ed trained so many CRNAs throughout Iowa, and we thought this was a great way to say thank you for everything he did for us.”

While several former graduate students made contributions to the scholarship efforts, it did not reach its fundraising goal until recently when the Thompsons made a generous gift of their own. The Thompsons—who now call Naples, Florida, home—understand the sacrifices their students made to get a great education.

“Growing up and in college, neither one of us had much,” said Edward. “We attended a commuter college, lived with our parents, and worked to afford school. During my anesthesia training, Sheila taught full-time, and I had the G.I. Bill and a work-study scholarship. We know that becoming a CRNA is a very long and arduous process, and we only hope that the scholarship will help support students and also continue to increase in its amount.”

Under Edward’s direction, the UI Anesthesia Nursing Program rose to a No. 5 ranking in the country. Today, the program continues to be ranked in the top 10 in the nation. However, for the Thompsons, it was important that students got more than a strong academic experience.

“We tried to treat our students like family and did things for them on most every holiday and special occasion,” said Sheila. “We also included them in out-of-town meetings, where they hopefully got a chance to know us better. We knew they needed to experience more than the academic side while at Iowa.”

The Dr. Edward S. and Sheila A. Thompson Graduate Scholarship is the first endowed scholarship for graduate students within the UI CRNA program, which means that students will benefit from financial support for generations to come. Cornelius is especially grateful to the Thompsons.

“Ed took a chance on me,” he said. “At that time, you still had to take the GREs to get in. I didn’t have the best GREs, and I wasn’t a stellar student. But now I’m excelling in my profession and giving back to my profession—just like Ed and Sheila did.”

Learn how you can make a difference by contacting Dayna Ballantyne, director of development, at dayna.ballantyne@foriowa.org or 319-467-3727. You can also support CRNA students today by making a gift!