Blending the Art and Science of Nursing 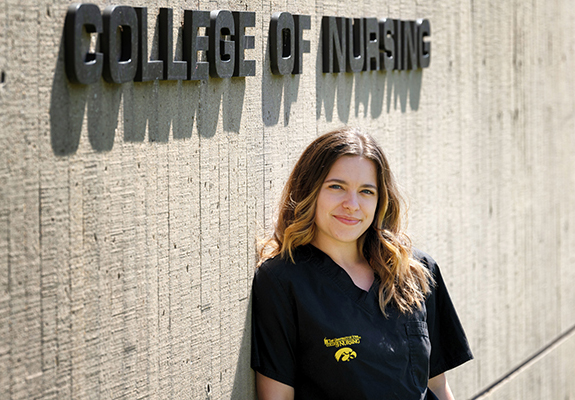 Isabella Penniston never thought she would be performing research as an undergraduate in the College of Nursing. But several research experiences opened her eyes to new possibilities in her chosen career.

As a child, Isabella Penniston would tell people she wanted to be a scientist when she grew up.

And in high school, the Bellevue, Iowa, native discovered a love of nursing too. But it was during her second year at the University of Iowa that she discovered she could merge her early desire to be a scientist with her passion for helping patients. Several undergraduate research experiences over the past few years have changed how she thinks of her profession.

“I never really thought about nursing in a research context,” says Penniston, who will graduate this spring with a BS in nursing. “I don’t think a lot of people do because it’s not something we think of nurses doing. I didn’t know that people built careers off nursing research. Being able to put research within the context of a career I love so much already is amazing. It opened up a whole lot of new doors to me.”

A medical terminology class in high school got Penniston thinking about a career in health care—she originally was leaning toward studying musical performance. While shadowing a doctor in Davenport, Iowa, Penniston was drawn to the relationships the nurses had with their patients and patients’ families.

“I realized that I not only liked the science part, but I also really liked the social aspect,” Penniston says. “I think as a nurse you form deeper relationships with patients than other health professionals get to do. So I set my sights on nursing and ran with it.”

A health sciences-specific tour of Iowa’s campus cemented her desire to be a Hawkeye. She applied to the College of Nursing as an early admission nursing student.

“Because the College of Nursing is so small, I could tell it would be a super personal experience,” Penniston says. “I also liked how downtown and campus were so merged together. It was a perfect balance of a small town, which I was used to, and a bigger city. It was comfortable but also new enough that it was exciting.”

Penniston took part in the India Winterim during her sophomore year, and it was there she was first exposed to research. The group created a resource that was translated into two languages for people with limited resources to help family members prevent bed sores.

“That trip was one of the best things I did during college,” Penniston says. “I still use things I learned there today when taking care of patients in the hospital.”

Through the Iowa Center for Research by Undergraduates (ICRU), Penniston undertook an independent side project examining whether such symptom-management interventions had an impact on the depression and anxiety levels of the patients involved in Gilbertson-White’s study. She was invited to present her findings at the Midwest Nursing Research Society conference in Kansas City and a conference at the University of Iowa Holden Comprehensive Cancer Center.

Penniston is currently working with Gilbertson-White to analyze how cancer patients experience symptoms when they also have other chronic conditions, with a goal to better specialize interventions for specific symptoms. She created the interview guide used in the study—which has been put on hold during the COVID-19 pandemic—and piloted it on a select set of patients. She was invited to present this work this spring at the American Academy of Hospice and Palliative Medicine conference in San Diego and the Oncology Nursing Society in San Antonio, Texas, but both were canceled due to COVID-19.