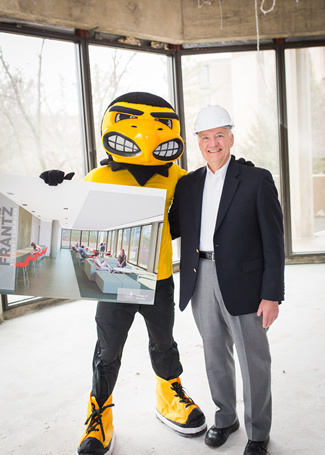 A new student commons will be named after the late Rita Frantz and her husband, David.

Rita Frantz (73MA, 78PhD) was a tireless promoter of her profession—even at the end of her life. Though the former University of Iowa College of Nursing dean was battling ovarian cancer, she continued to work from home during her treatments, finally resigning her position on Sept. 6, 2016, just one day before her death.

To memorialize his wife’s deep commitment to her craft—and her college—Rita’s husband, David, has continued their tradition of giving back to the place she loved so much. His most recent gift of $500,000 will create the Dr. Rita and David Frantz Student Commons in the College of Nursing Building.

“Rita envisioned that the college was going to need this space for recruitment—and it’s what the students said they needed. She listened to students; she listened to everybody,” says David, who grew up near Iowa City and met Rita in Davenport, Iowa, where they both attended college. “The project manager overseeing the new commons praised her for her forward thinking about the space, and that made me so proud to have been her husband for 45 years.”

This is the first leadership gift in the college’s campaign to raise $2 million in private support to renovate the College of Nursing Building. In addition to the centralized student commons—which will feature collaboration rooms, individual study areas, and meeting spaces—the $10 million project will create new classroom and student spaces in the building, which opened in 1971 and has never been renovated. These updates are scheduled for completion in 2019. Although the university enacted a five-month moratorium on campus projects in April to address state funding cuts, building efforts like this one currently in the construction phase are continuing.

“Both Rita and David Frantz have made such incredible and impactful contributions to the College of Nursing throughout the years,” says UI College of Nursing Dean Julie Zerwic. “Our renovation started with Dean Frantz’s vision to improve the learning environment for nursing students and to elevate the teaching space to include state-of-the-art technology.”