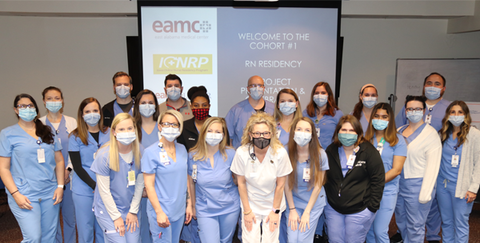 In November of 2019, I had the privilege of visiting Opelika, Alabama. There I had the opportunity to work with Lea Howell, Jennifer Terry, and many other team members from the East Alabama Medical Center to kick-off implementation of the Iowa Online Nurse Residency Program. For the year prior we had been collaborating on the project of bringing IONRP’s Blended Option to the medical center to support the transition to practice of newly graduated nurses hired by the organization. It was time to officially launch the initiative, but little did we know that just one month after enrolling the first cohort of RN residents in the EAMC program, COVID would come to town and threaten to derail everything. The inaugural cohort of the EAMC program launched in February of 2020. This group only knew one month of ‘normal nursing’ before COVID hit in the area and the nurse residency program would become more important than ever before.

“When COVID hit many of our inaugural nurse residents were just ending their orientation. They left work one day and came back the next and everything was different. The program was paused for just two months and by the time I was able to get back together with the group the pandemic had already begun to take a toll. They were looking worn, exhausted, and shaken by all the things they had seen that will never be forgotten,’’ said Lea Howell EAMC Residency Coordinator and Clinical Educator.

Howell describes how she would round on these residents on various units, and she was in awe. She couldn’t believe the work that they were doing with just a few months of experience under their belts. “I told them early on that we were all in the same boat, in the same storm. Some of them may have felt like they were in a john boat, taking on water but moving ahead, others a canoe with friends, trying to paddle together and figure things out, and many like a kayak tumbling through the rapids. But they made it through the storm without drowning,"said Howell.

EAMC graduated their first group of 22 RN Residents on March 5th, 2021 and 1-year after the pandemic they are excited to share that they are 81 nurse residents strong. Not only did 22 new graduates complete the year-long program, but they had a total of 13 residency projects presented at the March 2021 celebration. Howell said, “I felt like a momma giving birth to 22 babies and sharing them with the world! I gave them all a pair of surgical scissors, as we ‘cut the cord’, reminding them that they are a part of the EAMC family, and sending them off in Dr. Seuss style, with some of my favorite quotes.”

Implementing a new program is hard. Successfully starting one in the midst of a global pandemic is an unimaginable feat. When some organizations were dropping programs altogether, Lea, Jennifer, and her EAMC team persevered maintaining what they started and growing despite the difficult circumstances. Congratulations to EAMC on completing their first year of providing the Iowa Online Nurse Residency Program! We are delighted with your success and look forward to our ongoing partnership as you continue to provide this important support.

Interested employers should contact nicole-weathers@uiowa.edu for more information or set-up a time to visit 1:1, to learn more.